Everyone has their favorite corners in Kiev, there are places where absolutely must visit. And there are memo, past which can not pass. Talking about rankings is meaningless - each of them for yourself. But it is not impossible to admire them.
Therefore, arriving and taking off an apartment in Kiev, take a camera and go to fototurne the city, as he called his MA Bulgakov. To see the noise of cars Kiev tale, we just go on a journey.

Coming out of the metro station "area of Leo Tolstoy", climb up. We pass Taras Shevchenko Park and go to the first of our trip attractions.

Red building of Kyiv National Taras Shevchenko University. The main building of the main university of the country, located in the center of Kiev, on the street. Vladimir, 60, 1837-1843 years was built. University then was called the University of St. Vladimir. This most amazing University housing is built in the classical style, and striking power and harmony to this day. Botanical Garden of Academician Alexander Fomin, one of the most beautiful parks in the city of Kiev - behind the case in 1841, the Botanical Garden, has now been laid. 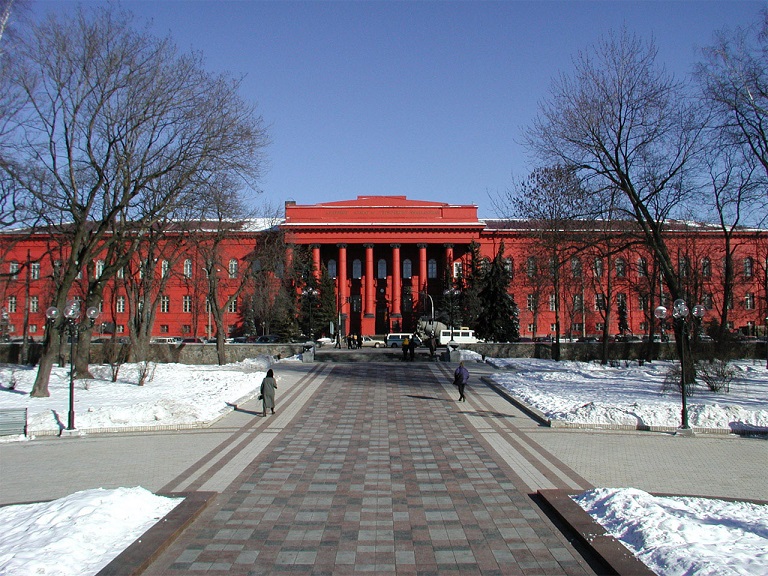 Kyiv City Teacher's House. It is located diagonally across from the red building of the university. Built in 1912 - then it was a Teaching Museum. This spacious, bright building seems, despite the size, surprisingly light, not overwhelming, and visually increases the space around it. 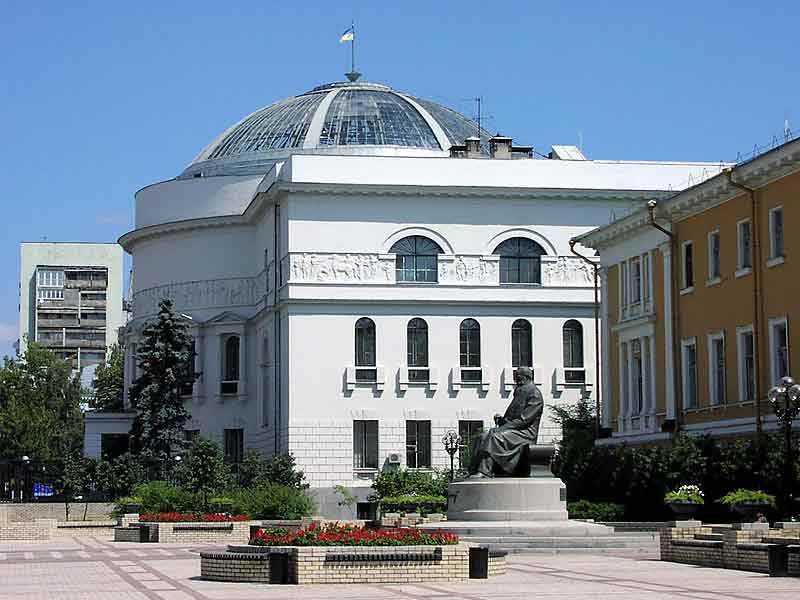 The National Opera of Ukraine named after Taras Shevchenko. Within walking distance of the University, on the street. Vladimir, 50, is located a magnificent opera house. It was built in the late XIX -. The beginning of the twentieth century, after the former completely burned. There should definitely visit, once you have arrived in Kiev - apartments for rent do not destroy, and the cost of tickets to the opera is readily available (although if there are any). 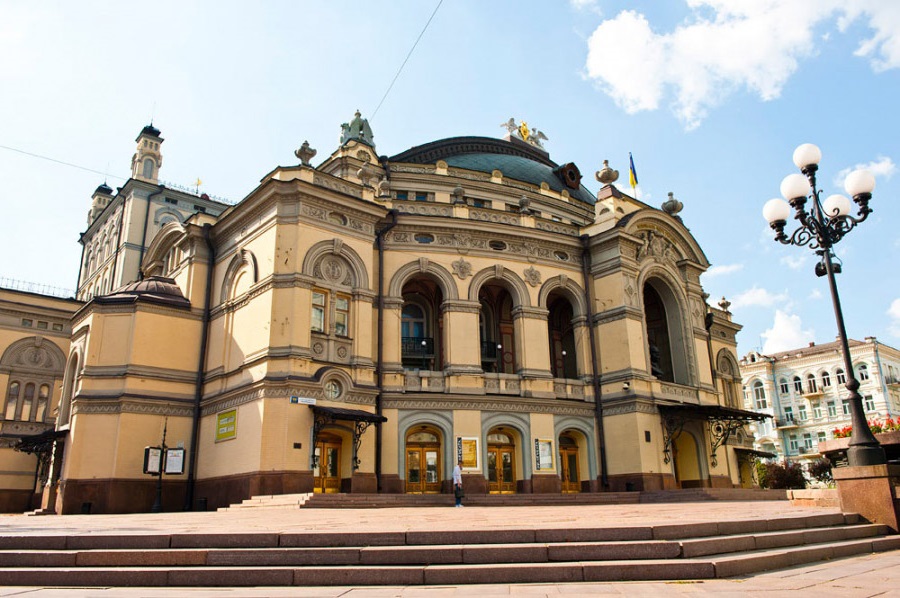 Golden Gate. The main entrance to Kiev time of Yaroslav the Wise, named in honor of the Golden Gate of Constantinople, and now found himself in the center of modern Kiev. To get to it, you can just coming out of the subway to the "Golden Gate" station (long before it reached from any place where you are sheltered Kiev - rent apartments in residential areas is hardly very heavy for you). The construction was destroyed almost completely, and now we see its reconstruction. This fortress tower with gates and gate church and among multi-storey buildings not lose its majesty. Surrounding the park itself, it still retains the reflection of Kievan Rus. 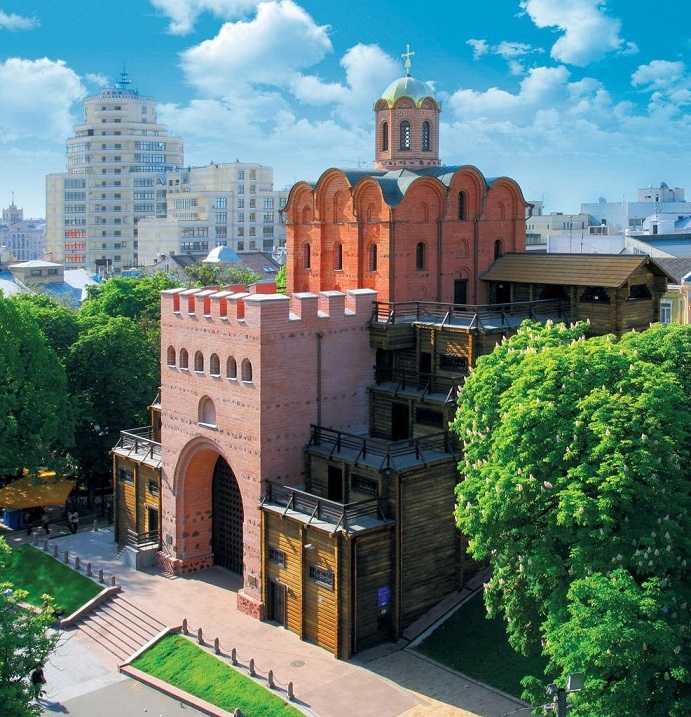 House Lone knight street Yaroslav Val built in the style of a medieval castle. On it still go gloomy legends even tell that there were going to Kiev witches. This original building was built in the late nineteenth century. 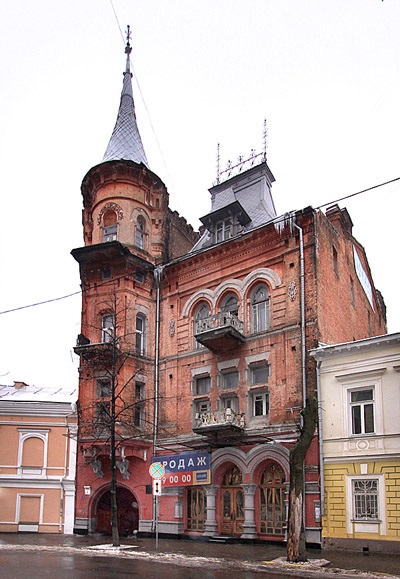 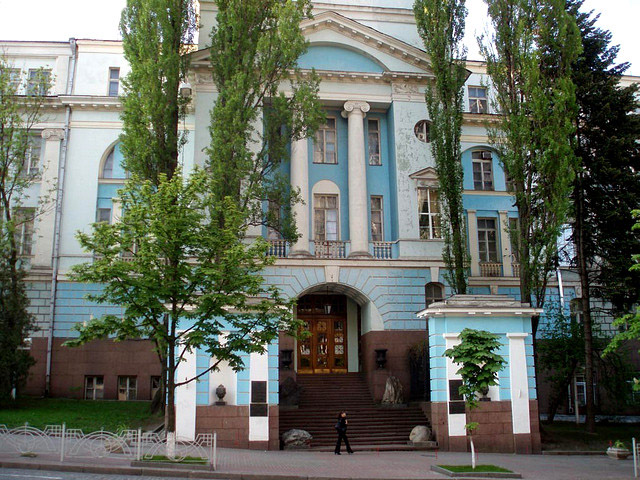 Richard's Castle - the Lionheart, or house of Richard - the so-called extraordinary house in the style of British Gothic at the top of Andrew's descent, just below the St. Andrew's Church. About him tell many legends with the mention of evil spirits, curses and mysteries. But speaking as he saved the defenders of Kiev during the Second World War - it has arranged safe houses, but never anyone there had not been arrested during raids. 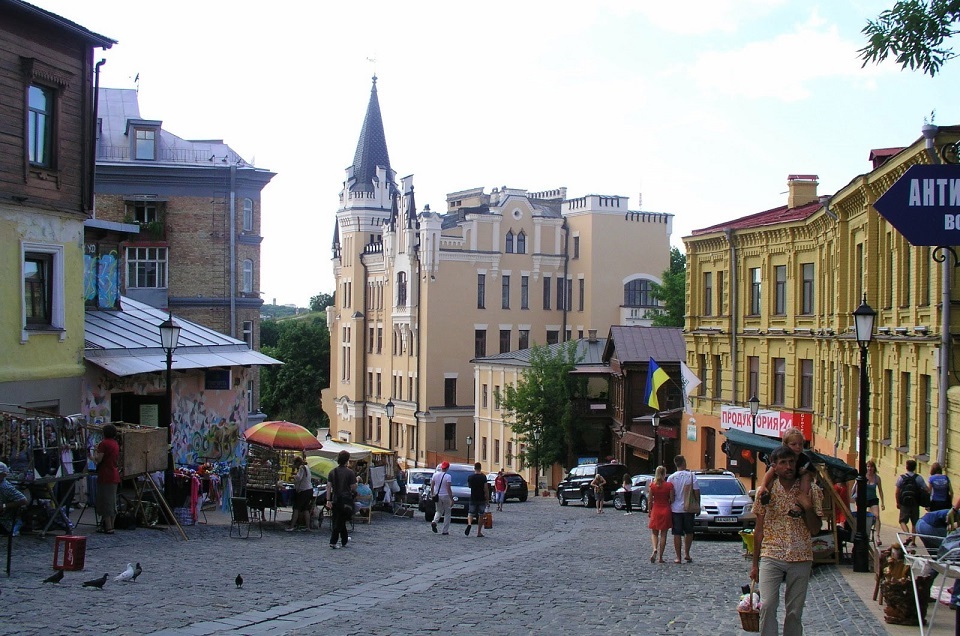 Andrew's Descent. The whole street - tourist attraction in Kiev, one of the most beautiful streets in the city, which has preserved the spirit of old Kiev and drowned among the buildings. It connects the Old Town with Podil. Now is the center of arts and crafts and art, there are several operating theaters, the famous Museum of one street, Literary-Memorial Museum MA Bulgakov. 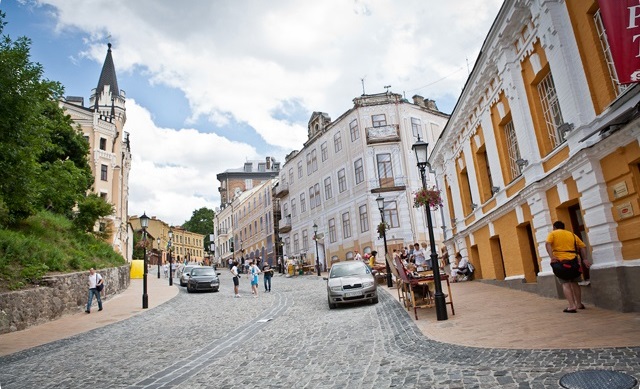 House of Peter I. This is folk name of the apartment building late XVII - early XVIII century. Now it is the Museum of the history of charity in Kiev. 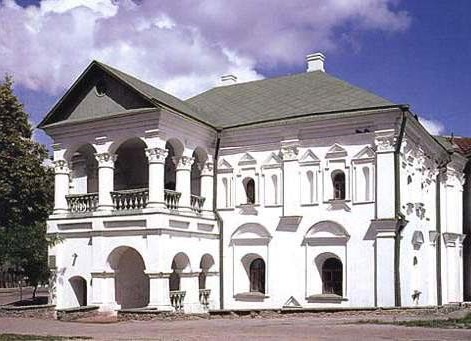 Contract house. In its premises concluded trade contracts, hence the name. Built in the classical style in 1817 after the death of the first Contract house fire. 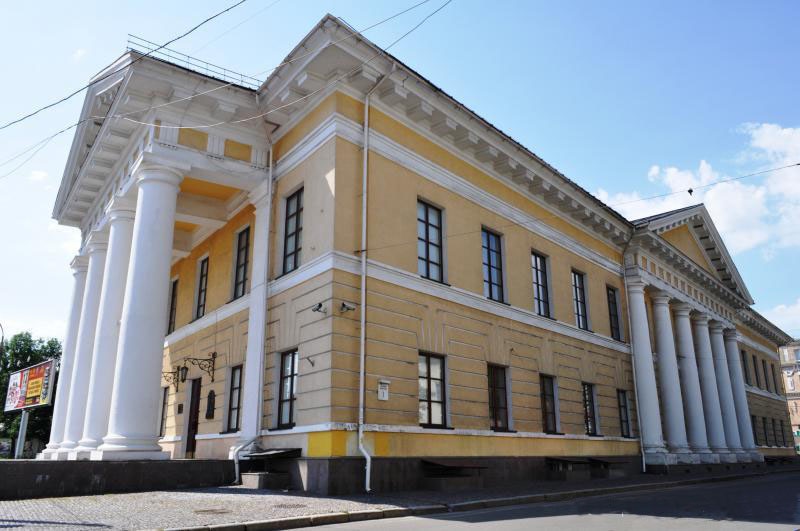 Kyiv-Mohyla Academy. Its Circular building, located on ul. Skovoroda, was built from the nineteenth century. And then rebuilt several times. The body is so named for the original shape. 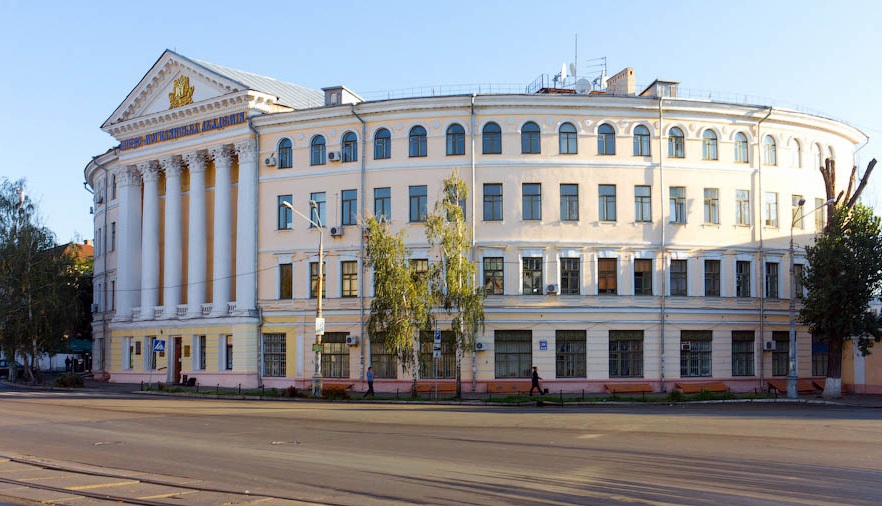 National Philharmonic of Ukraine, located in the European area (st. Vladimir descent) was built in 1882 by architect V. Nikolaev Merchant Assembly during the Second World War the building was severely damaged, but it was restored. To this day, this building with its unique acoustics columned hall - is one of the musical life in the center of Kiev. 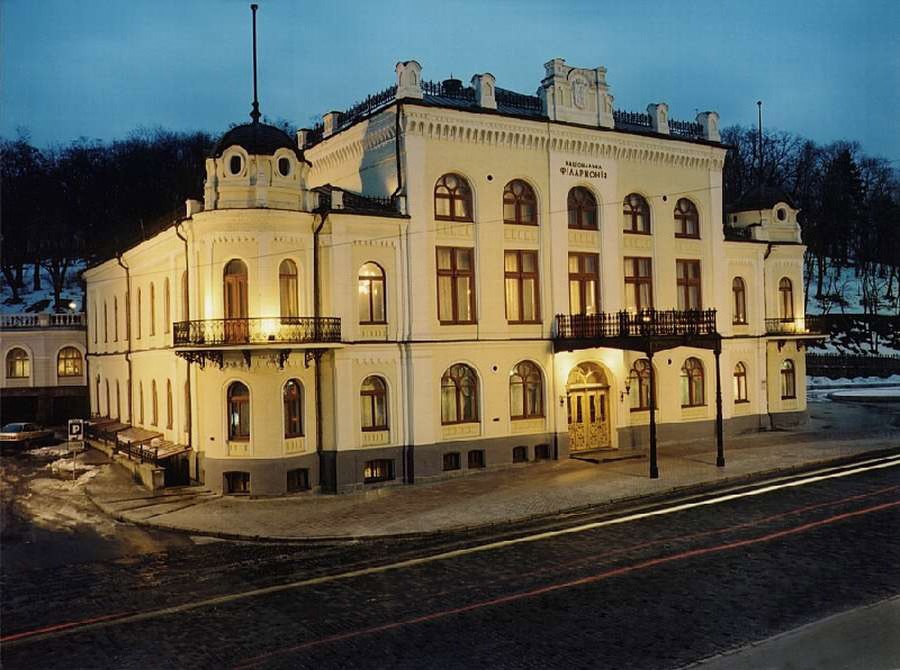 National Parliamentary Library of Ukraine, Kiev region, first public library, built in 1911 with funds collected by the city residents. This - the oldest building of the library is the destination in Kiev.

Mariinsky Palace. This "openwork" Baroque building was built by architect Rastrelli in 1752 Now the building, which is located near the Verkhovna Rada building is the ceremonial residence of the President of Ukraine. Amazingly beautiful, it is beautiful during the day, but it is absolutely mesmerizing, mysterious light lit lanterns in the night - then it seems to be floating in the streams of light. 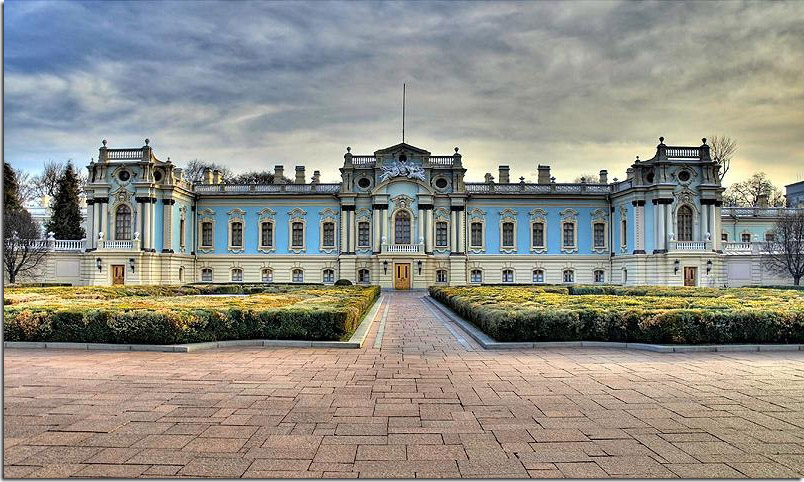 House with Chimeras. In the center of Kiev on Bankova Street Tale lives, embodied in stone. The house was built in the early 1900s by architect Vladimir Gorodetsky, decorated with sculptures of fantastic creatures, terrestrial and aquatic animals, whimsical decorations. Who is the President of Ukraine House receptions. 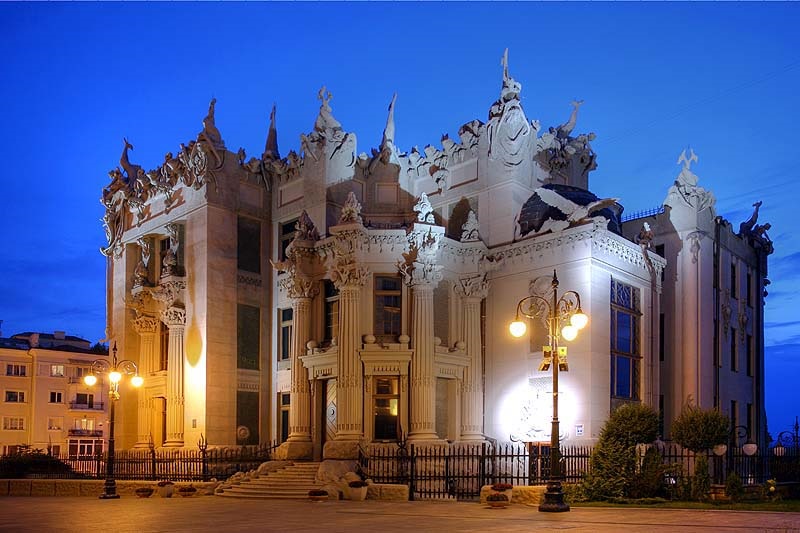 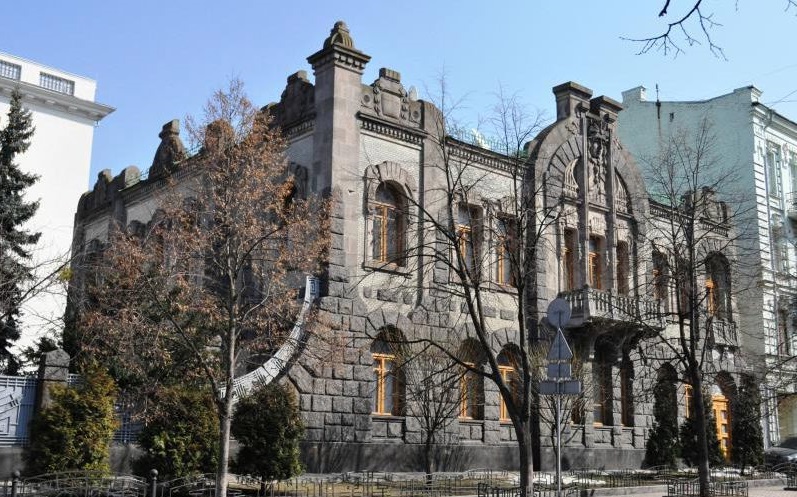 Bessarabian market. Designed by G. Guy. The original shape of the building with the large size gives it lightness. It is interesting to visit, and in the market - there is retained a unique flavor of the old merchant in Kiev. So, if you are arriving in Kiev, daily rented apartment nearby - definitely go here. 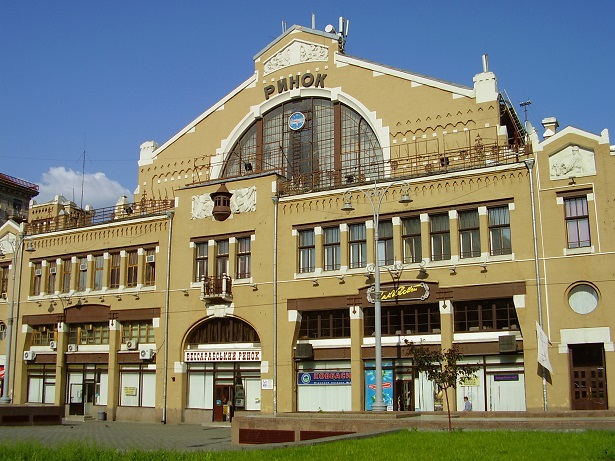 Chocolate house on the street. Shelkovichnoe, 17/2. It was built in 1901, designed by V. Nikolayev in the Italian Renaissance style. This building is brown in color due to the peculiarities of processing leaves the impression as if it is built of chocolate. Even among the new buildings, this small house is not lost, and looks Jewels.

Oblique caponier New Pechersk fortress. As a fortress, it did not work a single day, but caponier used as a political prison, after the Polish uprising in 1863. Today it is a museum "History of the use of facilities of the Kiev fortress." It is located in a densely populated area, surrounded by high-rise buildings, where there are apartments for rent - Kiev waiting for you to chat out of the window to show their secrets. 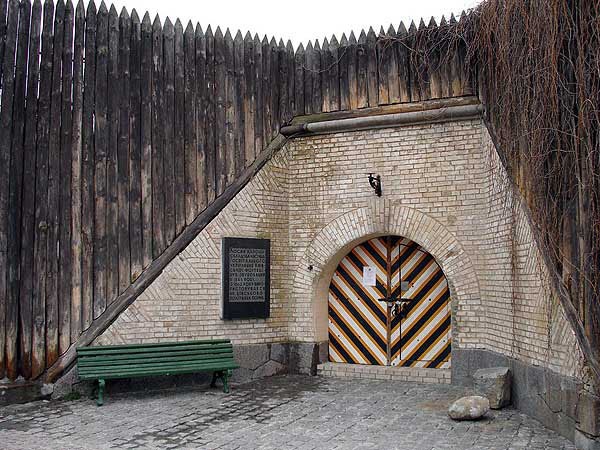 Fortress on the hill. If you want mystery and antiquity, of course, have to visit this place. Here, in the early twentieth century were stored explosive materials, and in 1918 there was a huge explosion in these warehouses. 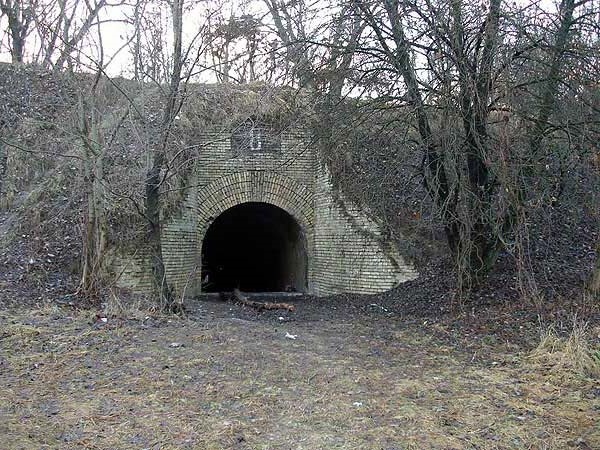 Fortress on the hill

Of course, in our walk, we met only a small part of Kiev's secrets, so after a rest acquaintance with them should continue, especially as the cost of an apartment per day is quite a bit longer allows you to stay in Kiev.